Buckingham Palace & Changing of the Guard 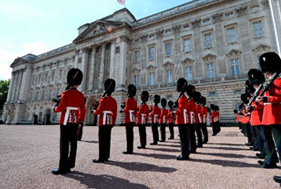 Buckingham Palace opens up its Sèvres-china-stuffed, gold-leaf-adorned State Rooms to the public from July to October each year.

One of the most famous churches in the world, with 1,000 years of history. This is where William the Conqueror and Queen Elizabeth II were crowned and William and Kate exchanged vows. The Gothic edifice, all echoey cloisters, mosaic-encrusted chambers and martyrs carved into the stonework, hosted the funeral of Princess Diana and is the burial ground of everyone from Geoffrey Chaucer to Oliver Cromwell.

Prince Charles once remarked that the skyscrapers that surround the second-largest dome in the world are “like a basketball team standing shoulder-to-shoulder between you and the Mona Lisa”. The gentle, swollen shadow of Sir Christopher Wren’s 17th-century Renaissance masterpiece does seem all the more exceptional set against the City’s spiky, vertigiousness skyline.

A noble glass spire that embodies the energy and ambition of London’s financial district, or Qatari Sovereign Wealth Fund petrodollars mutated into thousand-foot dalek with a head that’s been subjected to a dodgy pencil sharpener? Wherever you stand on the architecture, London’s highest viewing platform has become one of the city’s most popular attractions.

The world’s most famous clock, which features in the film Mary Poppins, on the label of HP sauce and on every London postcard ever made. It is worthy of its nickname (technically it’s called Elizabeth Tower; the main bell inside is Big Ben) – the edifice scales 96 metres, with minute hands over four metres long. The only way to visit the tower is to apply as a British resident in writing to one’s MP.

London Bridge may have a nursery rhyme named after it but Tower Bridge pips it as a tourist attraction; the formidable Victorian Gothic edifice raised from steel, Cornish granite and Devonshire stone is not just a river Thames icon but also a fun day out in its own right. Visitors can hang out in the glass-floored high-level walkway 140ft above the water, and explore the Victorian engine rooms with its original furnaces and steam engines.

A favourite with children and no wonder with the first T-rex fossil ever found and the skull of a triceratops. Be sure to whizz into the Minerals gallery to see the 1,400-pound iron meteorite that fell in Argentina in 1783 and the species that inspired the mermaid legends in the Mammals room. 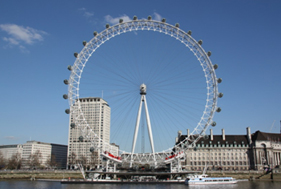 This 443ft ‘ferris wheel’ with air-conditioned passenger capsules (32 to represent the 32 boroughs of London) offers some of the best panoramas of the city. Rotations last about 30 minutes, and the wheel rotates 26 cm per second, which is actually not as slow as it might seem – three times that of the average tortoise. 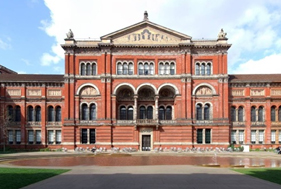 Alexander McQueen gowns rub alongside sandals from Ancient Egypt in Fashion Room 410. You’ll also find everything from 500-year-old Persian carpets to Japanese Tokugawa suits of armour and furniture made for Marie Antoinette in Britain’s leading art and design museum.

The Making of Harry Potter is a public attraction in Leavesden in southeastern England.

The heart of London shopping, bustling Oxford Street has more than 300 shops, designer outlets and landmark stores: here you can find some of the best shopping in London. Home to the legendary Selfridges, it also boasts a range of famous department stores such as John Lewis and Debenhams scattered among every well-known high street chain imaginable. Grab some bargain fashion at Primark’s massive flagship store, and check the latest trends at Topshop in Oxford Circus. Get off the beaten track by slipping into a side street, such as St Christopher’s Place and Berwick Street, where you’ll find some real treats.

An impressively elegant shopping street, Regent Street offers a good range of mid-priced fashion stores alongside some of the city’s oldest and most famous shops, including Liberty andThe Apple Store. Nearby, historic Jermyn Street is renowned for men’s clothing shops and is so typically British it’s enough to bring out the old-fashioned gent in anyone! Jermyn Street is particularly well known for its bespoke shirt makers such as Benson & Cleggand shoe shops including John Lobb.

Whether you want to splash out on the very best in designer clothes or just love luxury window shopping, Bond Street and Mayfair are the ideal places to go for some extravagant retail therapy. Popular with celebrities on a spree, this is probably London’s most exclusive shopping area, home to big names, including Burberry, Louis Vuitton and Tiffany & Co. Neighbouring South Molton Street boasts iconic fashion store Browns.

Westfield has two major shopping centres in London at White City and Stratford. Westfield London is home to high street favourites including Debenhams, Next, Marks & Spencer and House of Fraser, along with luxury brands, such as Louis Vuitton, Jimmy Choo, All Saints and Ted Baker. There’s also a cinema, gym, several bars and restaurants, all under one roof! If you’re a fan of shopping centres, don’t miss Westfield Stratford City in East London, which boasts 250 shops plus 70 places to dine, making it one of the largest shopping malls in Europe

The birthplace of the fashion and cultural revolution during the Swinging 60s, the 13 streets that make up Carnaby are located between Oxford Street and Regent Street, and feature more than 100 brands and 60 restaurants, bars, cafes and pubs. Step under the iconic arch to find an intriguing mix of independent boutiques, heritage brands and new designer names, as well as a choice of cafes, restaurants, bars and great English pubs. Refuel at restaurant hub Kingly Court, just off Carnaby Street.

Visitors from around the world flock to Knightsbridge and Brompton Road to visit the illustrious shops and department stores. This is the place to go if you’re looking for prestigious brands and up-to-the-minute trends from the world’s fashion elite. Best known for Harrods and Harvey Nichols, you’ll also find big-name fashion designers on Sloane Street, as well as high-street brands such as Topshop opposite Harrods.

Camden is the ideal shopping destination for lovers of alternative clothing. Here you can find some of the most unusual London shops. Get off the Tube at Camden Town, walk along Camden High Street, and you’ll find plenty of stores selling gothic fashion and punk clothing, alongside tattoo and piercing parlours. Further ahead, Camden Lock Market has it all, whether you are looking for a perfect birthday gift or a souvenir, from hand-crafted jewellery, to vintage leather bags.

Head to Spitalfields for a great range of independent shops. A vibrant hub for young designers and creative businesses, Spitalfields hosts independent boutiques including Mercantileand Collectif Clothing, as well as renowned brands, such as Barbour and Belstaff. Don’t miss lively Old Spitalfields Market, with its array of stalls selling antiques, fashion and street food under a beautiful Victorian arcade. 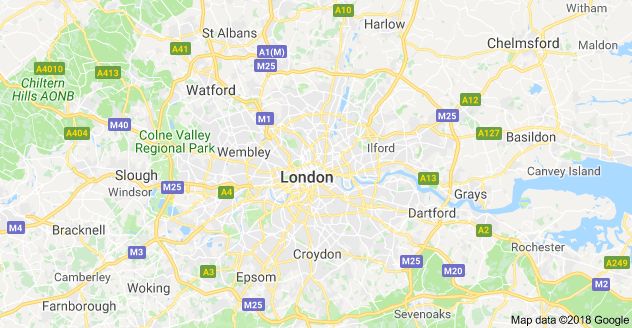